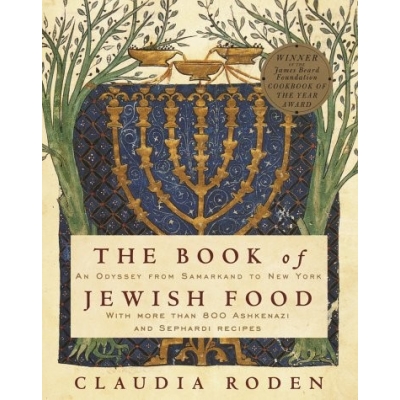 THE BOOK OF JEWISH FOOD

Claudia Roden, author of The Book of Jewish Food, has done more than simply compile a cookbook of Jewish recipes--she has produced a history of the Je

Claudia Roden, author of The Book of Jewish Food, has done more than simply compile a cookbook of Jewish recipes--she has produced a history of the Jewish diaspora, told through its cuisine. The book's 800 recipes reflect many cultures and regions of the world, from the Jewish quarter of Cairo where Roden spent her childhood to the kitchens of Europe, Asia, and the Americas.Both Ashkenazi and Sepharidic cooking are well represented here: hallah bread, bagels, blintzes, and kugels give way to tabbouleh, falafel, and succulent lamb with prunes, which are, in turn, succeeded by such fare as Ftut (Yemeni wedding soup) and Kahk (savory bracelets). Interwoven throughout the text are Roden's charming asides--the history of certain foods, definitions (Kaimak, for instance, is the cream that rises to the top when buffalo milk is simmered), and ways of preparing everything from an eggplant to a quince. In addition, Roden tells you everything you've ever wanted to know about Jewish dietary laws, what the ancient Hebrews ate, and the various holidays and festivals on the Jewish calendar. Detailed sections on Jewish history are beautifully illustrated with archival photographs of families, towns, and, of course, food. The Book of Jewish Food is one that any serious cook--Jewish and non-Jewish alike--would gladly have (and use often) in the kitchen.